If you’re the type of traveller — or staycationer — who chooses their hotels for the perks and extra inclusions, you’ll be particularly excited about the latest addition to New Zealand’s accommodation offerings.

Mövenpick Hotel Auckland has now opened its doors, marking the latest offering from the Accor hotel group and the Swiss sweets brand’s first site in New Zealand. But don’t worry Wellingtonians – the hotel chain promises another is set to open in the capital in July, so your time will come soon.

And if either the chain’s name or its country of origin have you thinking of sweet treats, yes; they’re very much part of the hotel’s menu.

For starters, Mövenpick Hotel Auckland is celebrating chocolate hour every afternoon in the hotel lobby, where guests can enjoy live demonstrations of truffle rolling and cupcake icing while scoffing and sweet treats galore. If you prefer to enjoy your dessert in bed, a 24-hour sundae service (not to be confused with Kanye West’s version) is also available. Got an ice cream hankering at 3am? You’ve picked the right hotel. Kids are allowed free unlimited ice cream for the duration of the stay, which is probably not something to announce too loudly in their vicinity. For guests in the mood for more than just chocolate, cocktails and ice cream, the hotel is home to Asian Fusion restaurant BODA and also has a big focus on nutritious breakfasts. You can start your day with a workout in the gym, before a shot of juice or yoghurt blended with fresh fruit and vegetables at the breakfast bar. After all, it’s all about balance.

With 207 guestrooms and suites, a conference centre and a library, Mövenpick Hotel Auckland is now open and is one of more than 110 of the brand’s accommodation sites worldwide.

Mövenpick Hotel Auckland can be found at 8 Customs Street East in Auckland’s CBD, where it opened its doors on Monday, May 16. A Mövenpick Hotel Wellington is set to open in The Terrace in July.

Alright, alright. So we’ve sat here all day grumbling about Valentine’s Day, about manufactured romance, about disingenuous, ‘love’ related holidays and the atrociously high price of roses. Words like ‘phooey’, ‘poppycock’ and ‘hell naw’ have been bandied about. Pay no attention to the phones under our desk, messaging that special someone, planning a little get-together later on. If we run into you at these undeniably romantic, unashamedly snuggly Auckland bars and restaurants, don’t be too harsh on us. We love love.

The post Auckland Bars and Restaurants That Are Undeniably, Unabashedly Romantic appeared first on Concrete Playground.

Sure, a restaurant named FISH doesn’t leave a lot of unanswered questions over the type of food it serves.

The Hilton’s signature restaurant, perched on the end of Princess Wharf with arguably Tāmaki Makaurau best views of Waitematā Harbour, has garnered a reputation for many things during its 11 year run: stand-out service, an exceptional wine list and of course, that million dollar view out from the Northern tip of Princes Wharf to the Hauraki Gulf and back to the city skyline.

But most of all, it’s got a rep for serving up some of the city’s finest kaimoana ever since it first was opened by celeb-chef Simon Gault back in 2011.

Now, after months of closures throughout level 3 and beyond, the waterfront eatery has reopened with a refreshed menu and two internationally acclaimed chefs at the helm.

There are, of course, plenty of non-seafood options for those eaters who can’t think of anything worse than an oyster straight out of the ocean. The new menu boasts pork belly, cheeses, cauliflower and lamb rack. But its the deceptively simple, straight-from-the-water flavours of the seafood that are set to make this spot shine again. Go soon, while the weather is still turning it on.

The post FISH Restaurant Has Reopened With a New Menu, New Ethos and Award-Winning Chefs at the Helm appeared first on Concrete Playground. 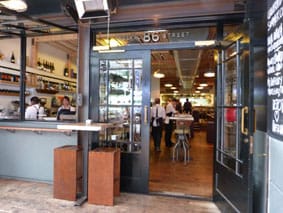 If you slip down Federal Street between the Sky City’s valet parking entrance and Sky Grand’s entrance you’ll see a raft of new restaurants and bars spear headed by celebrity chefs and bursting with happy diners. It’s easy to miss though if you’re not a regular to the casino or one of the inner city commuters who hot foot it down Federal. Buses line the street like a train at any given time and a taxi rank stretches for at least half of it. But when they “move that bus” (Auckland Council please make it permanently so!) the big reveal is quite simply fabulous.

Today I lunched at Al Brown’s Depot. He opened his doors at the same time Luke Dallow opened Hummingbird (read our opening night review here) next door and Sean Connolly opened The Grill just on the other side of the Sky Grand’s new entrance. Like Hummingbird there is outdoor seating for those brave enough to sit amongst the bus fumes, but we decided on a table next to a new window that has been blasted through the Sky Grand wall to reveal their swanky lobby. 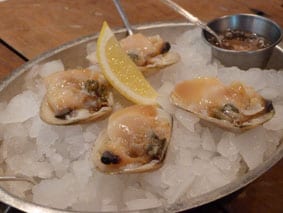 Just slide these suckers off the shell in one

Nick (from somewhere in the north of England by the sounds) was our waiter and after hearing about the Depot’s most popular dishes until a little pool of drool collected on the table in front of me, we let him come up with a selection of small plates and one main for us to share. I was also keen to try the wine on tap. Yes, pinot noir out of keg from Mt Edward in Central Otago’s Gibbston Valley. It was 17.5˚ (which I find quite suitable for a red) and is done especially because Al is a mate. It pays to be mates with Al, who was sitting behind me, because he’s been selling barrels of it. That and Spy Valley sauvignon blanc and Mt Edward rose, also on tap but chilled like beer.

While poring over the menu a little plate of complimentary and deliciously smooth babaganoush arrived with flat bread. But it was the raw seafood bar that grabbed my attention. 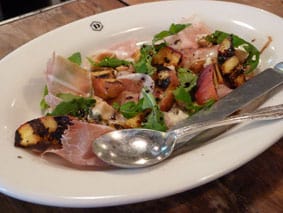 I’ve never seen tuatua just sitting on ice like oysters before. Let alone tasted them. The only way I’ve eaten tuatua (after doing the hip swivel in the sand at low tide) is to throw them on the barbie in their shells with a little white wine when they pop open. But no. Here they come raw and shucked with a little vinagarette to drip on and “schloopp”. That’s the sound you make when you suck them off the shell. (NB: Not first date fodder). The texture is tougher than an oyster, but the flavour mild, like a scallop maybe? You’ll have to try them and decide for yourself. $2.50 each.

A plate of raw salmon sliced thinly was our next dish with wasabi mayo, $15. Nice but not as wow as the rest of what was about to come. 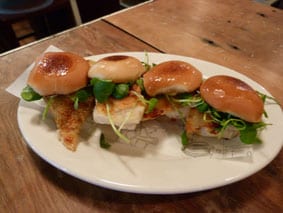 These tiny fish burgers are FAB

The plate of the day for me was the white peach and proscuitto salad. It was a surprise and I have already tried to emulate it at home putting peach slices on the bbq. This was sublime: warm charred peach slices, salty proscuitto, rocket, toasted macadamia nuts and tart blue cheese with a cab sav dressing. I think it’s only a special so you’d better get there quick.

Next was also fab and I’d already read Tweets about it: Turbot Sliders, 4 for $15. This light fish is similar to flounder, lightly egged and pan fried, served with aoli in tiny burger buns that are a little sweet. But we still weren’t done. 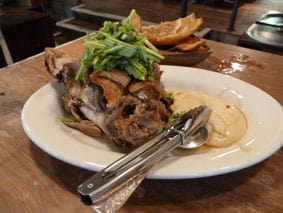 A swig of my tumbler of pinot and the 6-hour cooked pork hock which fell off the bone served with crispy skin, grated apple and a parsnip puree arrived. This is a main dish ($29) and would be great to share with a wine for two.

I’d almost forgotten that we also ordered the potato skins – most likely deep fried, they were that delicious, with shaved chevrago cheese and dusted with porcini powder giving it a truffle taste, $10.

Done and dusted and heading home for a lie down! I’m going back with my Bloke as soon we can 🙂